We are a voluntary, community association of people who want to contribute to the revival of the Cibulka Forest Park. We plan to gradually improve the grove and its surroundings and open it to the public after many decades. The Hájovna association was founded in the autumn of 2015 on the basis of the civic activities of people from Cibulka who want to preserve the legacy of the Bishop of Passau, Leopold Leonhard Thun von Hohenstein. Another goal of the association is to participate in the preservation and protection of the Košíře-Motol Nature Park for its natural, landscape and aesthetic values. It is also important for the health of the inhabitants of Prague. Its forests and meadows create favourable air in the dry polluted climate of the city and with north-westerly winds from here clean air flows into the centre of Prague The romantic Bishop Hohenstein Park, which is part of the Košíře-Motol Nature Park, is owned by the city, but the castle itself is in the hands of the Cibulka, a. s. company, which, despite its cultural value, has let it fall into disrepair for 25 years. The homestead and the park were declared a cultural monument on 3 May 1958. Leopold Leonhard Thun von Hohenstein, and probably the author of the design of the classicist chateau and the surrounding romantic park with statues and small garden architecture, is perceived by the local people as one of the most important figures in the history of Košice. The homestead is an important part of our life in Cibulky. We are convinced that the legacy of Leopold Leonhard Thun von Hohenstein deserves a fate other than decay and oblivion. 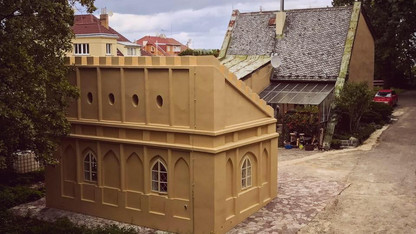